Since yesterday, an image supposedly to be from the next-gen GTA has spread across the internet. It all started when French website “Jeux-France” posted the image. 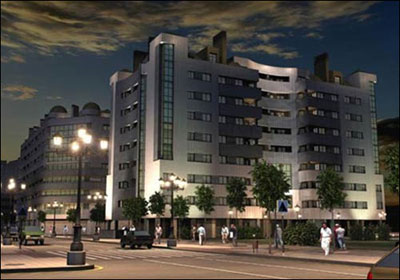 They claim that the environment will be six times larger than San Andreas, with 350 different cars to drive, and would see players having to administrate fuel levels in their vehicles. Where they get their information is unknown.

Well what is Rockstar’s word on it? This morning they phoned gamesradar to inform them that the picture is not of any GTA game currently in development. While Rockstar has no idea where Jeux-France got the shot from, the company has gone on record to deny that the picture came from any of its internal development studios.

You'll no doubt be seeing lots of fake screenshots of the coming months, years actually. But rest assured when Rockstar release the first real screenshots we'll have them.

Its just a render someone made. Those pedestrians looks like real people taken from photos.

You can hardly even SEE the cars. How can you make that assumption?

You can hardly even SEE the cars. How can you make that assumption?

The image doesn't even have that GTA-esque look. Although there is no denying that Grand Theft Auto on next-gen consoles will look quite different from current releases, it is expected that it would look recognizable as a Grand Theft Auto game.

Plus, it seems a bit funny (if not stupid

) that the french site would just say...yeh we'll post that, even though there is no evidence to back it up that it is GTA...or without checking it with Rockstar maybe.

The French site were probably sent it by some kid and then they posted it because they figured they can get publicity out of GTA sites posting about it...maybe.

Let's face it they were probably none the wiser if they weren't avid GTA fans...

Hah mystery solved right here, and from who again? yes from me Adriaan, with some help from Spain.

This guy PM'ed me and talked to me on MSN. Well apparently he lives near those buildings and was excited he wanted to find out more. Anyway after a long talk I asked him if those buildings was build recently or if there is any building developement in the area.

Then he said yes, the buildings was finished not so long ago. Hah! My predictions was correct(I hope). So that image could have been made before they actualy started building for the planning etc.

I'll get a image soon of the real place, hey wait.. maybe I can ask him to take more images in the area lol! Then I could photoshop it to look like a game

. Nah that would be the style of the French.