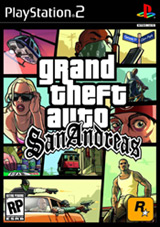 This page mainly details all the new features that will be in San Andreas. All of the following info has been confirmed either by things seen in screenshots from Rockstar, articles in various magazines or things that Rockstar have confirmed.

The game will be set in the early 1990's. 1991 to be exact, 5 years after Vice City. The game is based around gangster themed films from that era. The game is so big it will be on a Dual-Layer DVD and will take at least 150 hours to complete. The same innuendo's we saw in GTA3 and VC will return and will be better than before.
"It's the third part in a loosely held together trilogy that started in 2001, that went to the mid '80s and has now come to the early '90s".
San Andreas is an entire state. The state consists of three cities, each based on a real life city, they are:
Los Santos (Los Angeles), San Fierro (San Francisco) and Las Venturas (Las Vegas) each of these roughly the same size as Vice City making San Andreas 4-6 times bigger than Vice City.

Five years ago Carl Johnson escaped from the pressures of life in Los Santos, San Andreas... a city tearing itself apart with gang trouble, drugs and corruption. Where film-stars and millionaires do their best to avoid the dealers and gangbangers. Now, it's the early 90s. Carl's got to go home. His mother has been murdered, his family has fallen apart and his childhood friends are all heading towards disaster. On his return to the neighbourhood, a couple of corrupt cops frame him for homicide. CJ is forced on a journey that takes him across the entire state of San Andreas, to save his family and to take control of the streets.

The graphics engine is drastically improved and includes new things like real-time reflections on cars, radial lighting, smog. Everything has a separate model for day and night so its much more realistic. Shadows are created depending on the position of the sun, and you can hide in them. There will be more weather effects and things like tumbleweed in the desert keep San Andreas feeling alive and vibrant.
Draw distance compared to Vice City is doubled in urban areas and quadrupled in rural areas. Ragdoll physics will be in the game so crashing and fighting will be much more realistic. Sunlight will be simulated which will make it life-like and shadows will appear where they should be. Real-time reflections on floors and puddles etc. will be present. Vehicles will accumulate dirt and rust as you play through the game. The HUD will be similar to that of GTA3 and Vice City but will contain new things such as a stamina meter.
There will not be as many 'pop-up' items while the player is moving throughout the game therefore improving the frame rate. Trees will be rendered as a group from distance, but rendered separately as the player gets closer. This allows a much bigger draw distance and higher frame rate, also foliage will only be rendered when the play can actually see it. There is a 35%-50% increased polygon count over Vice City.

The main influence on the game is rap and a rap station has been confirmed, an array of other genre's will be there too. Some of the radio stations to be confirmed include SF-UR, Flash FM, Hit Radio and K-Jah West FM and we will be listening to genre's such as Country, Rock, Funk/Soul, Reggae House, Alternative and Hip Hop. The amount of licensed music tracks is three times more than Vice City's.
Pedestrians will say over 400 different phrases and to add to that you will also be able to interact with some of them.

Enemy and pedestrian AI will be greatly revamped and they will now think more logically. You can't beat someone to death in broad daylight and not have people notice and react. Pedestrians will have around an hour of dialogue compared to Vice City's 10 minutes. Enemies will be smarter, which will make robbing houses take a lot of skill. You will be able to follow pedestrians through their daily routines i.e leaving the house, going to work, going to the shops etc.
Couples will walk down the streets and will react if you run between them. People will shout stuff at you if you become overweight
Gang members will no longer stand around doing nothing, they will be chillin' out, smoking and drinking, they might even have a turf war, or wait back for you to attack them and ambush you. Everything is incredibly life-like compared to the previous GTA's.

There will be pimped-out lowriders and you are able to modify your own car. Bicycle's are now included as well as a variety of other unusual transport such as lawnmowers, combine harvesters, monster trucks and quad bikes. Police will now ride on motorbikes as well as drive their cars.
An 18-wheeler with detachable trailer will be present and the way the trailer acts depends upon the load. Some vehicles are made specially for certain terrain i.e quad bikes. There is now a much wider variety of aircraft, more planes and helicopters.

You can dual wield pistols and potentially other weapons like Uzi's etc.
A few of the weapons we have seen so far are: Chrome Shotgun, Spaz 12 Shotgun, Uzi, Ingram Mac-10 and a Colt .45.
There is an accuracy meter on screen which will go up and down depending on how many people you hit. The choice of weapons reflects those that were available in the early 90's. The crosshairs which are aimed at people will change colour depending on how much health they have, green represents full health, yellow represents below full health, and red shows you the character is nearly dead.

There will be a vast amount of buildings which you can enter which have fully rendered interiors, and the only loading times will be when you enter these, and that's only a short pause which makes a change from the boring screens shown when travelling between islands in previous GTA's. Buildings seen in screenshots include Well Stacked Pizza, Tuff Nut Donuts, St. Brutus Motel, Reece's Hair Facial Studio, Pay N' Spray and a Tattoo Parlour. There will also be various new fast food restaurants. San Andreas also has its own version of Hollywood called Vinewood.
San Fierro contains hills and missions will be more driving based.
Las Venturas will be desert and have loads of weird stuff in it including tumbleweed.
The game will contain photographs and digital images as textures.
There will be Lakes, Farms and Fields in the countryside.
The map is so big players will get lost frequently. Your phone will ring and if you answer you will be given instruction on where to go.
Mount Chiliad takes a whole minute to fly to the top in a helicopter and much longer going up/down by a road vehicle. It takes roughly 30 minutes to get to the top on a BMX.

Swimming has now been implemented but wont be a big part, however some missions will include it.
Police can hold on to the back of your car to try and catch you.
Police helicopters can aim their blades near the ground to stop your car or cut you up.
There will be more cars and pedestrians on the screen at once.
There are now many different ways to complete missions.
In Las Venturas you can buy and build a casino then gamble in it with others.
You need to eat to retain your stamina. If you eat too much fast food, you become fat and pedestrians mock you for being fat. You also run slower. To remedy this, you can go to a gym to exercise.
There will be a barber and you can get your hair cut and people comment on how it looks.
You can now rob homes. The robberies will require skill and planning, however.
You can recruit gang members and use them to do four person drive-by’s.
Car-jackings will have a much more sinister and threatening vibe to them.
Being a Gang Member only makes up about 15% of the total game.
Carl and the Orange Grove Families can take over areas and generate money from them. One of the many things that will add to the replay value after the game has been 'completed'.
If you drive a vehicle into the water, you have two choices, climb out of the window and swim to shore, or stay in the car and sink, where you will have a certain amount of underwater stamina.
There are parts of the game where you will work as a gang, and parts where you will work alone.
The game is now very non-linear, and depending what choices are made, it will be rare for 2 players to have the same type of game. The missions will be the same, but so much can change depending on choices you make.
There will be in-breds and degenerates in the Countryside and some missions will reflect the contrast between the towny and the country people
You can see various different facial expressions on characters.
There are now many more ways to complete missions. You could run straight in shooting, or sneak through the shadows and pick off the enemies one by one.
When the player only has one wanted star, hiding in the shadows should be enough to throw police off your trail. The player must tap the X button on the bike in order to pedal faster.
The camera will automatically zoom behind the player at the touch of a button and the player then has the ability to freely target using the analogue stick. The auto-target will still be a part of the game though.
The game will take at least three times longer to complete than Vice City
At least once every couple of days your character has to eat. If you skip meals he will be come weak, and if you feed him too much he gets slow and then gets fat. There is a wide selection of places to eat... so what you eat counts as well. Strength will effect his punches, but bulk up at the gym too much and he will loose speed
For the first time in a series the game will adjust its difficulty if the player becomes stuck. Rockstar assures that that the adjustments will be minimal and almost invisible to the players, so the missions won't become a breeze.
There are a lot more mini games.
You can wear a lot of new clothes.