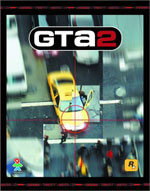 Grand Theft Auto 2 was the brilliant follow up to the original GTA, and brought many new things to the game such as a whole new array of weapons, new cars, new music, the mission structure is much more complex and it feels so much better to play than GTA1, the graphics are also more advanced thus improving the gameplay

To receive missions from each gang you have to build up respect with them, the only way of doing this is to go and kill their rival gang members.

The policing has been significantly improved, no longer is their just a few cops with roadblocks hoping to stop you on your murderous rampage, now they will send out SWAT teams in armored vans and if you still get past them you've got tanks trying to obliterate you.